I was so excited about my husband’s Christmas gift in 2018. We had just begun renovating our home which would include an outdoor living space. We discussed wanting a large table in this space to be able to have people over to eat and fellowship regularly.

I contacted a friend who owns a company that does custom woodworking and asked him to get a table created for us.  Nine feet long I told him, sassafras wood, bench seats.  The table wasn’t ready in time for Christmas nor was the space to put it, so I printed a picture of one similar and wrapped it up for my husband to open Christmas morning.

I was excited to see what I expected to be his excitement over the table.  But when he opened the box and figured out what it meant, he began to fire off a series of questions, mainly focused on how big the table was going to be.  I got no thank you, just an interrogation that was followed by him getting up and pulling out our renovation plans to measure the space we intended to put the table in.

“Do you want chairs to fit on the ends?” He asked me.  “Because I don’t think they will fit.”

We re–visited this discussion in some similar form no less than ten times over the course of the next week.

At first, I was hurt, but by the end of the first week of his worry over the table fitting, I was downright mad. And we had it out over the table more than once. What I thought would have been an exciting gift turned into something I wish I had never done.

A few weeks later I was facilitating some training for a client titled “Understanding Yourself and Others for Managers.”

This training focuses on building self-awareness and using that awareness to become aware of others and adapt leadership style and decisions based on the personality of the person(s) you are working with.

It uses the DiSC Model to do this: 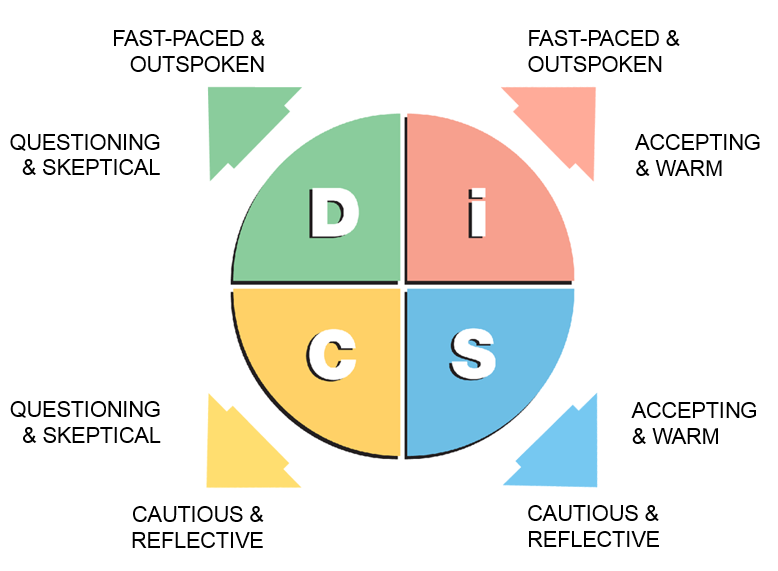 I had an epiphany during the training when talking about conflict at work created by personality differences, realizing that these differences had largely prompted our table dispute.

My husband is a DC and I am an iD (or a Di depending on the situation).  I was in my warm and fuzzy and also fast-paced box of getting the present- yay! Surprise! So fun!  Why would I stop and measure how big the table needed to be?  It needs to be big, nine feet sounds good!

My husband, on the other hand, had retreated into his C box of total questioning and skeptical with a healthy dose of cautious and reflective to go with it.  To exasperate this mindset, he had started in a role at work about a year prior that put him in a position of leading facility operations at his hospital, almost all of which is governed by strict compliance standards.  Meaning, most of his days were measuring and measuring twice. And documenting that measurement. He had brought this mindset and the importance of it home with him. This led him to process and agonize over and over again – this table isn’t going to fit.

And then, when we both got mad that we weren’t being understood, we both jumped into our full-blown D, aka- lion, box to duke it out over whose mindset was right.  And we know what happens when two lions fight.  There will be blood.

Sounds like something you’ve dealt with at home? At work? Yep, I thought so.

So what do we do?

1. Be self-aware of how you are wired and how that causes you to behave.  A good way to verbalize this is to utilize the DiSC model in identifying priorities:

The priorities of different styles are the words around the circle.  My priority in the table giving situation (and most all situations) was enthusiasm and action, causing me to behave in a way that made me decide to “surprise” my husband and not pay attention to the details (aka- the size of the table) of the surprise.

2. Be aware of how others are wired and how that causes them to behave. With the table situation, I should realize that my husband’s main priority is most often accuracy, causing him to want to know the exact details of the gift and be involved in those details to ensure they are accurate.

3. Ask yourself, is the way I behave based on my personality consistent or different than the person I’m working with?  Obviously, in the table situation, our priorities are the complete opposite.  In the DiSC model, the styles that are opposite of each other on the circle either end up 1) combative or 2) complementary to one another.

4. Then, ask yourself, what conflicts could arise because we are the same or different? In this situation, our lack of awareness and attention to the priorities of each other led to combativeness.  My feelings were hurt because I got zero enthusiasm from him, and he was frustrated because he could not ensure accuracy.

5. Then, realize the Platinum Rule– The platinum rule states that we should treat others like they would want to be treated (contrary to the Golden Rule of treating people like you want to be treated).  We all have different needs and priorities as the DiSC model points out. If I’m giving a gift to someone I love, I should think first about their needs and priorities, not my own.  The same goes for leading with a servant leadership approach.  As much as I love a surprise, he does not.  Getting the table should have been handled differently. And the response to the table surprise could have been handled differently as well if only we had both been self-aware and aware of the needs of each other.

Whereas we laugh about the table debacle now (by the way, it fits quite nicely in the space, thank you very much!), it is an example of how we can let our differences get in the way when we approach any number of things lead to way bigger issues.

It also points to the fact that we can allow our differences to complement instead of contradicting each other, leading to better outcomes.  More on that in our next post….