Leaders, Pace Yourselves with 3 Tips from an Elite Runner to Do So

Our training crew took part in the Hartselle Half Marathon to cover our 13-mile long run last week. It’s a quaint race through back roads of farmland. With a field of only 260 runners, cooler temps (finally!), and a volunteer crew that epitomizes southern hospitality, it was a great way to kick off a weekend.

I went into a race, much to my husband’s aggravation (he likes a game plan even more than I do), without a particular time goal or strategy. I just wanted to enjoy the run and see where it took me based on how I was feeling.

The day before the run, though, I tuned into a Marathon Training Academy podcast on my way back from a business trip and picked up a few tips that were in the back of my mind.  This show was an interview with Jared Ward, a top ten-marathon finisher in the Rio Games, a statistics professor at BYU, a father of soon to be three kids, and a self-described “running nerd”.

Jared wrote his masters thesis about optimal marathon pacing, and in the podcast, he described the lessons he learned from this research:

1.     Pace yourself. More experienced runners, and those that finish faster, tend to pace themselves, i.e., they don’t let the excitement of the race make them go out faster than they should. They started out slower and finished faster (running negative splits). Because of this, in the case of his research, the runners who did this were able to qualify for Boston. “Be conservative with your starting pace. The marathon is a long ways and it is going to beat you up throughout,” he says.

3.     Be consistent. His final piece of advice for those wanting to improve performance in the marathon is consistency. “Having a consistent approach is what helps,” he said, citing that one of the best runners in the world says four years of consistent training is needed to graduate into elite status.

Although I’m not striving for elite running status, I do want to get faster and I do want to lead better. I ran negative splits in the race, taking advantage of the advice to surge on a downhill which actually started my stronger pacing about mile 5.  I started out slow which was able to help me have energy to kick it at the end. 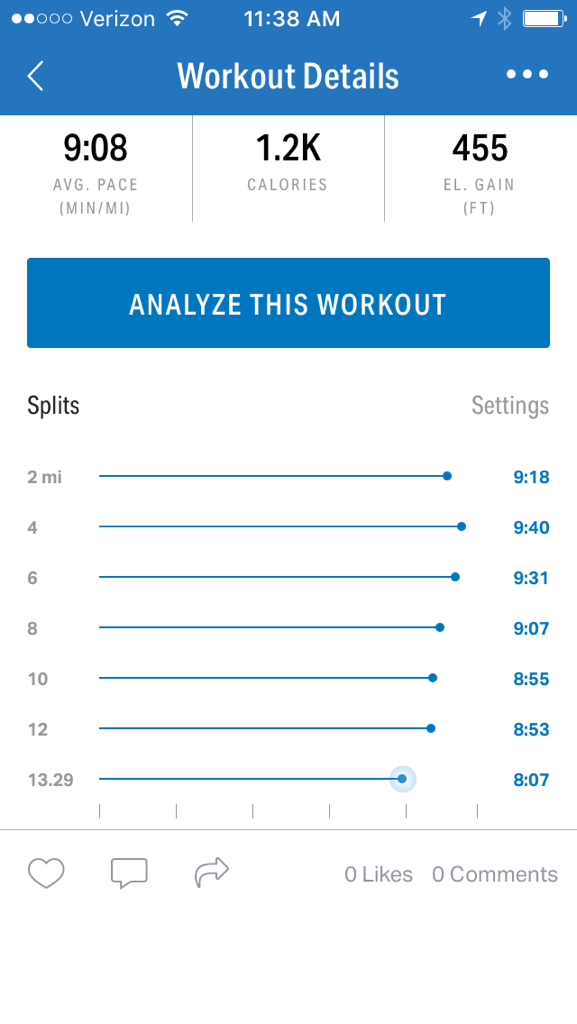 Leadership is a lot like the marathon. It takes pacing, strategy to know when to surge, and the consistency to see the plan through.

One of the things I see most in leadership coaching (and in myself as well) is that driven, type A leaders get excited about a plan and they go out too fast wanting the results too quick, and they (me) get impatient when it doesn’t happen. This leads to one of two things then happening: 1) they (me) either, move on to the next flavor of the month, never seeing anything through, or they 2) (me) end up being too exhausted to finish strong and see the plan to completion. This causes us as leaders to neglect to see the people involved in the process that are learning from our own inconsistency. We never, because of the message we send in our own behavior, teach others to appreciate the strategy of knowing when and how to pace and surge at the right times.

Although this race didn’t result in a PR, (I ran it in 2:01:23. My PR was actually in this same race two years ago at a 1:54 something.) I walked away with something much better- a new friend. She was a mom of two under the age of five, like me, trying to beat her PR of 2:02. We pushed each other through the last mile to the finish line.  I would haven’t ever have run the pace I did in the last mile without her beside me pushing me.

I’d like to think that in leadership, just like in this race, if I had been so focused on going out fast to get to the result I wanted, I would have bonked before the end. More importantly, this would have prohibited me from enjoying the race and making a new friend. Pacing, knowing when to surge, and being consistent in running and in leading focuses us for the long hall, giving us the opportunity to push each other to finish strong.