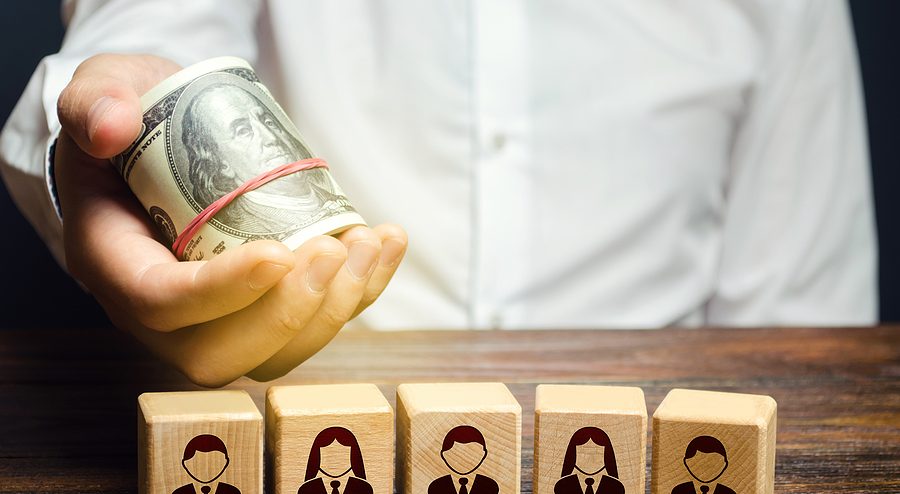 3 Ways to Think about levels of Pay + A “Bonus”

As you can tell from our previous post on all the hiring incentives that are out there now, it is a job-seekers market.

A recent LinkedIn update titled “Power shifts in a tight job market” summarizes what employers are doing to lure people to their open positions:

Employers eager to fill positions are offering more to attract talent — and they aren’t just upping pay or showing more flexibility — they’re also training workers and taking more chances on people who don’t meet traditional qualifications. “No experience necessary” roles have spiked by two-thirds compared to 2019, and posts offering starting bonuses have doubled, according to new data from Burning Glass Technologies. Meanwhile, minimum compensation requirements for people without college degrees are up 19%, per a Federal Reserve Bank of New York survey.

There are multiple factors impacting the supply and demand for labor. But it’s not just filling positions, it’s also about keeping people in positions.  Particularly acute in production and manual service workers,  a Conference Board report cites strong retention challenges: 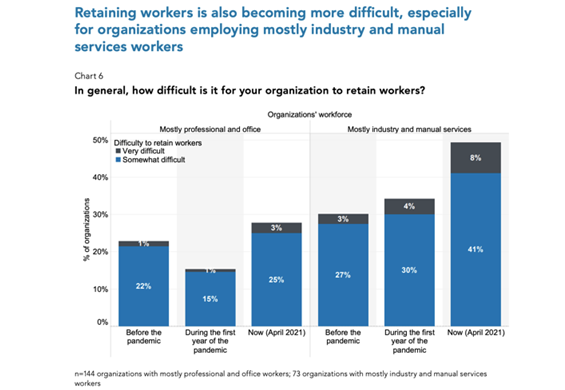 As we think about what can be done to impact the recruiting and retention challenges of today, it may be wise to think about how you think about pay. Obviously, employers are increasing their wages. Historically, as you can see from the chart below, wages have not kept pace with productivity, so rising wage rates may help to impact this equilibrium. 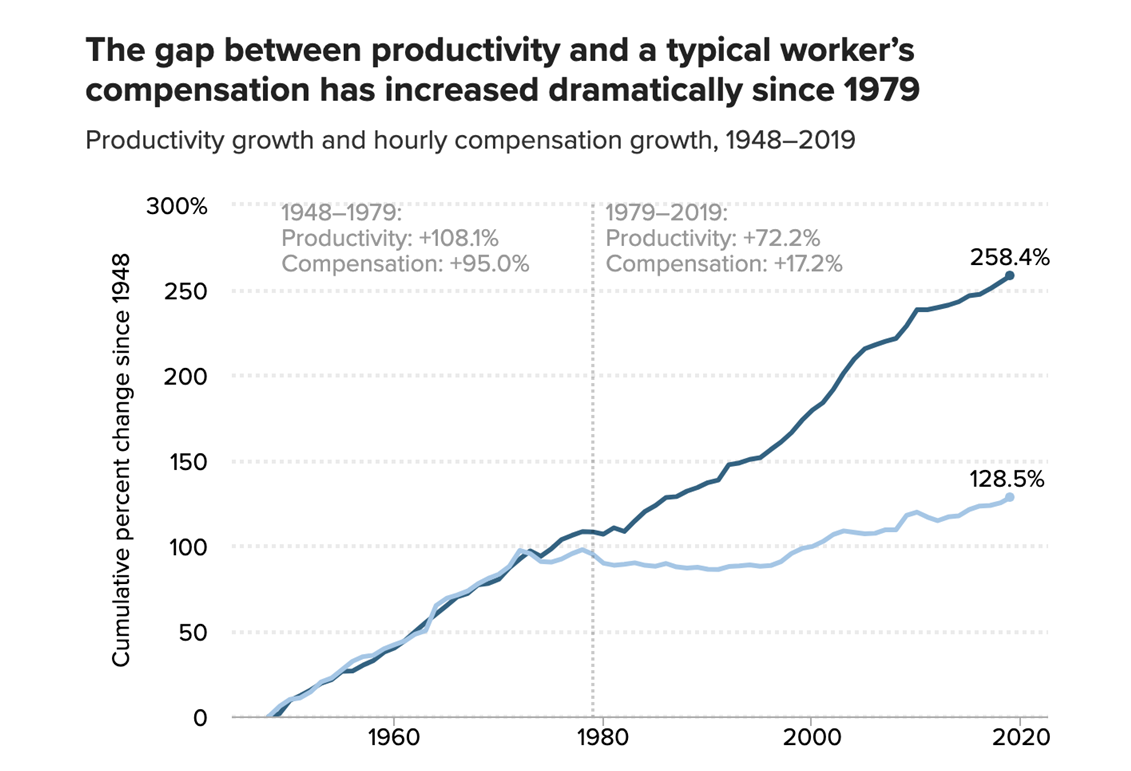 But until we think about pay differently, honing in on what each level of pay actually provides, we may not be able to effectively impact the outcome of increases in pay on worker recruitment and retention.

Adam Grant, in his podcast WorkLife provides a framework for three ways to think about wages in the episode titled “Why It Pays to Raise Pay” and I’ll add one more as a bonus that he and his guests allude to:

1. Living Wage: Living wages provide what people need to be able to provide for their basic needs.  Living wages allow people to meet the lower-order needs found in Maslow’s hierarchy of needs that you see below.  They provide for survival, and to a certain extent safety and security. (Other factors may impact safety and security needs being met beyond wages, as for example, safety not being present in a domestic violence situation of a wealthy family.) 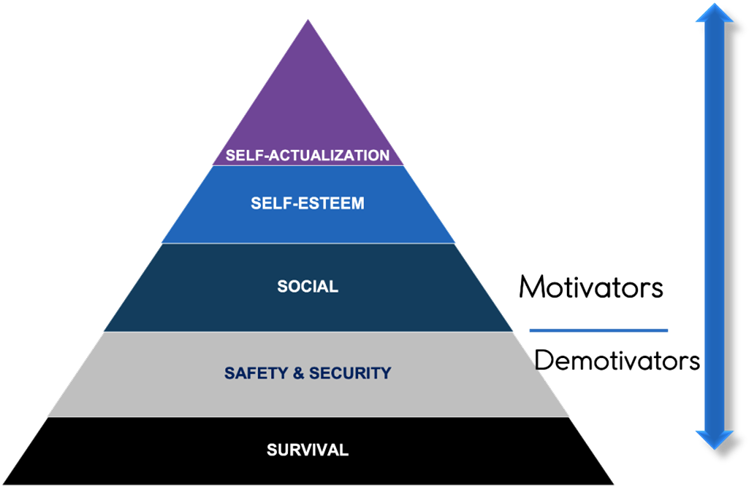 Maslow would tell you in order for people to move up the hierarchy to things that provide motivation at work, you have to at least meet these lower order needs.  By and large, pay is what provides for this.

What do you think a living wage is where you are? You can find out here: https://livingwage.mit.edu/

For example, here is Alabama’s data:

Some of these numbers were quite surprising to me.  Be sure you look at the information on how these rates are determined here.  Although you (and I) may not agree with all the things included in this living wage, what I find most fascinating here is this data seems to imply that most people with children really need two incomes to reach a living wage by combining their incomes. In addition, it is evident through the data how much of an impact childcare costs play into the variability of a living wage.

On a personal note, a ministry we’ve started through the Neighborhood Christian Center is helping one single mother provide a bridge for childcare expenses right now until she can see if she qualifies for a government subsidy program to help pay for their childcare.  She has three young children and no support from their father.  The cost for the three of them to attend daycare so she can work would require her to make $13.50 an hour JUST to cover daycare costs. Her pay rate right now is $10.00 an hour.

2. Fair Wage.   A fair wage, I simply define as a market wage rate by position.  Grant defines fair wage as “a living wage plus an amount that reflects an employees’ value for the organization or in the labor market.”

What is a fair wage where you live based on the positions you hire?

Just to give an example, here is the market wage in Alabama for a Production/Manufacturing Operator as reported from one of the subscription market wage sources we use:

3. Generous Wage.  A generous wage Grant defines as a shift in thinking to what the purpose of pay actually is.  He says, “Instead of thinking of pay as a way to incentivize people, think of it as a symbol of how much you value them.  When people feel valued, they add value.”

It’s easier to get concrete data to define what a living and fair wage is, but a generous wage is so ambiguous.  It means different things to different people and to different organizations.

Grant provides a couple of concrete case studies in the podcast that can help you think through what generous wages look like. For example, PayPal committed to paying generous wages and defined it through measuring net disposable income, which is the money you have leftover after taxes and paying for all essential living expenses.  The threshold they set for employees was having 20% of their take-home pay be in this category.

It can’t be understated, however, that in order to work, generous pay has to be combined with a bonus. And that bonus isn’t monetary.

4. Necessary Bonus: Treat people holistically.  In order for a generous wage structure to work, it has to be predicated with the mindset of believing in people.  This isn’t throwing money at a problem in order to fix it.  That won’t work. One of Grant’s guests on the podcast states that companies who don’t or can’t get on board with this mindset, “Don’t believe in people. They don’t have the faith in a person’s ability to do a good job in their motivation and in their competence. And of course, in public companies, there is a tremendous emphasis on the short term and a lot of executive’s compensation is tied to short term performance….. Another thing that gets in the way is mediocrity is a lot easier to pursue than excellence.”

As she says, it’s easy to say, “Pay as little as you can.” That doesn’t take a lot of thought. But thinking about “how high you should go? How much should you empower your people?” takes a lot more work.

I hope this framework of thinking about pay provided here through the WorkLife podcast will, at a minimum, provide some food for thought for you to pursue excellence instead of mediocrity.

What will you do next to lead your company’s compensation policy?

I am a capitalist at heart. This isn’t about paying people wages that do not allow for-profits or distributing wealth in a socialist way, it’s about paying wages that maximize profits and it’s about businesses taking ownership of generous pay, not the government being in charge of redistribution of wealth.

If businesses took ownership in paying people at least a living wage and hopefully seeing how profits can be maximized with generous wages, the government wouldn’t have to interfere in the market to impact the widening income gap in America.  I believe that much of what is going on now when it comes to why people are sitting out of the labor market due to making as much or more on government subsidies, is a result of wages not having risen past the recession rates of 2008-2009 and that was more than ten years ago now.

It’s time for businesses to take an honest look at their role in the problem instead of pointing fingers at everyone else and trying to put out a fire that has been kindling for a long time with a shot in the dark sign-on bonuses and other short term bandaids to entice people to work but that totally negate the need to do the hard work of building better workplaces where people actually want to work and stay.

If you listen to the entire WorkLife podcast here, you’ll see that one company engaging in this type of excellence around pay mindset has seen their revenue triple, their customer base double, and their workforce growing by 70%.  Taking a thoughtful look at your wages just isn’t the right thing to do for people to be able to earn a living, it’s the smart thing to do when it comes to maximizing your business’ potential.