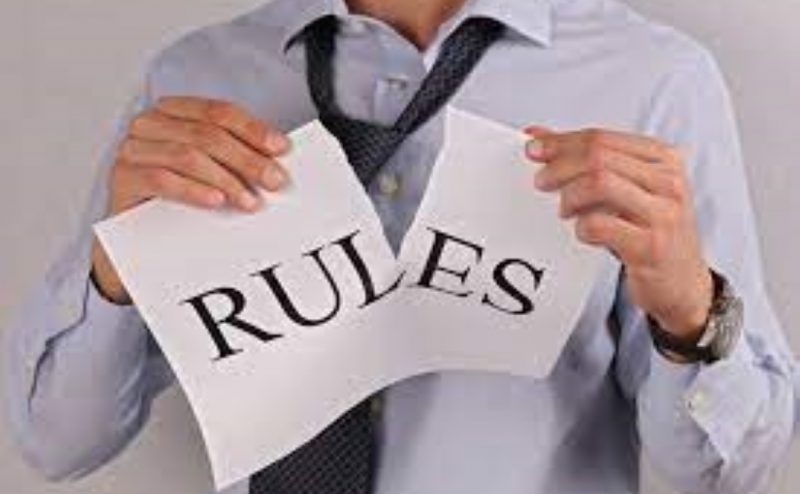 2 Key Places Where You Need a Rule Breaker

I was a hardcore rule follower as a child. I didn’t question rules in any form or the adults or organizational or societal factors that put them in place. I was on time, didn’t question when or how things were done in school, on the sports field, in my home, and in my community.  I did all the things I was “supposed” to do.  In fact, I don’t think I thought much about the why and reason behind much of anything, I just did as I was told.

For example, if a school supply list told me I needed 48 Ticonderoga brand pre-sharpened pencils (I don’t know if I actually ever had this on a school supply list with such specificity when I was a child, but you better believe my kids do now) on the first day of school, that’s what we brought regardless if it meant going to ten different places to find them.  Also, regardless of whether I liked that kind of pencil or thought they were the best tool to use. And if my mom wasn’t on board, I’d worry her to death until she followed the “rules” to the exact specification. I wasn’t coming with the “wrong” thing on the first day of school.  And the truth is, a lot of this probably helped me succeed in school. Education today is still by and large very much geared towards the industrial revolution environment that created it.

Now I see this on a supply list for my kids, and if Target doesn’t have that exact number packaged neatly in that brand, sharpened or not, we get what is available. And I’m getting what’s available for drive-up pick up. I’m not going into the store, and I’m most definitely not going to hunt them down. Invariably, they come in multiples of 18 and that never adds up to 48 evenly and because of all the other rule followers out there, they have zero left of the brand on said supply list.  I’ll grab two Target brand packages of 18 (yes, I know that is 36 not 48, and yes, I know some of you are just cringing thinking anyone would get less than what is on the list) because I know from experience to expect approximately 30 never used pencils to come back unopened in my kids stuff at the end of the year.  I just can’t bring myself to care, or have the time to do it.  What does it matter?  Especially when they don’t even use them!

Basically, I’ve switched in my old age to someone with a much lower level of rules orientation. Described this way, “people with a high level of rule orientation will have a more rigid view, seeing fewer conditions under which it is generally acceptable to violate rules. People with low rule orientation will have a more flexible view, seeing more conditions under which it is acceptable to violate rules.”

Rules orientation is really a sub dimension of conscientiousness, one of the most researched dimensions of personality. And as Psychology Today says, “conscientiousness is generally a key ingredient for success—in love as well as work. It’s also a major predictor of health, well-being, and longevity.”

Here’s the breakdown of conscientiousness dimensions in a tool we use to help leaders build self-awareness called the Work Behavior Inventory: 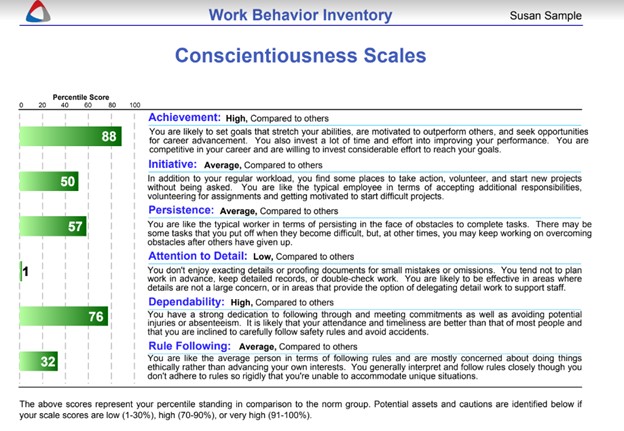 Of course, you read through these and most people would think, man I’m going to hire someone that is high on all this stuff! Conscientiousness is, in fact, one of the key predictors of success across almost all job types.

So, where do you want to consider hiring someone with low instead of high rules orientation? Or if you are low in rules orientation, where are you going to thrive? I think there are two key spots:

1. In start-up and high-growth organizations where you are trying to create things, not maintain the status quo (as Kris’ post states, when you are in need of pirates, not the people in the Navy) you need someone with a lower tendency towards rules orientation.

One of the places we really like to use the WBI assessment because of its analysis of rules orientation is when we are advising Alabama Launchpad finalists.  These are entrepreneurs working to create and grow high impact start-ups across the state. A lower level of rule following contributes to higher levels of “Creative Innovator” and “Business Start-Up” occupational fit as seen through the WBI. These people are trying to create something entirely different from the pencil, so they most definitely aren’t following the rules in the pencil buying market in order to succeed.  They want to make the pencil obsolete.

2. Secondly, you’ll want to consider the need for low rules orientation folks in organizations that have always played by the rules, heck they invented them, but things are no longer working. Typically, they have major issues on their hands. This is often because they are more concerned with the rules than anything else, and that has led to the downhill slide.

These organizations need someone to come in and say, why did you buy that type of pencil in the first place?  Does the supply list even serve a purpose? Do your kids even use pencils anymore in school? Well, they use computers all the time now, so six pencils for the school year will do, and it doesn’t matter what kind they are because they are on a computer now all the time anyway. This is the case where you need to bring in a pirate or a band of pirates to ask a bunch of questions, challenge the status quo, shake things up and fix stuff, also most likely saving you some money too and restoring profitability in the case of for-profit businesses.

I find myself in the middle of both these scenarios right now as I’m trying to grow our business and also help a few key clients shake things up.

I think I’ll be a pirate for Halloween this year.  I would have never gone for a pirate custom as a kid, probably citing something like pirates are boys (cultural rules and norms).  Well, bring me an eye patch now!  In my view, being a pirate is a heck of a lot of fun.

Are you a rule follower or a rule breaker?